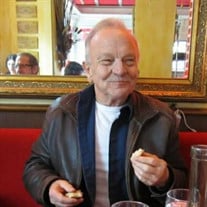 Dennis Allan Lei, 73, passed away in his Port Orchard home on December 25, 2020. He was born to the late Benjamin and Elsie Lei, September 9, 1947, in Sonora, California. Dennis graduated high school in Benicia, California, class of 1965. Truly a jack of many trades, Dennis spent his early working life in diversified industries such as construction, office management, real estate, sales, and warehouse management. He went on to become the proud owner and operator of the Puget Sound Wine Cellar in Port Orchard, Washington, from 2004 until 2009. Also, in 2008, he was voted President of the Port Orchard Chamber of Commerce. He finished his extensive working life with 12 years at Fred Meyer, first serving as a manager of their apparel department and then as the wine steward of their East Bremerton store. Dennis is survived by his wife Janet; his children Danny, Brian, Josh and Tessa; his brother David; and his grandchildren Alyssa, Andrew, Lauryn and Abby. Dennis was preceded in death by his brother Benny in August 2004. Dennis loved kids and was often found coaching for his sons' little league teams, volunteering at his daughter's elementary school, and bringing laughter and joy everywhere he went. The mid '80s introduced Dennis to a chef, The Frugal Gourmet, who ignited in him a lifelong passion for the culinary arts. In the '90s, he enjoyed playing on a men's softball team, spending time creating beautiful furniture from wood in his shop and rollerblading his worries away. Time brought about changes in residence and career pathways, but one thing that remained consistent his whole life: He always loved to wind down at night by reading (anything and everything; but if it was written by Stephen King, about World War II or baseball, he would truly be in his happy place) with a nice bag of sweet treats handy. Dennis' ability to provide for his family, his love of people, and sense of humor will never be forgotten. A memorial video will be played via Zoom on January 31, 2021, at 6:30pm for all who wish to attend. The meeting ID is: 792 1985 8044 and the Password is: Sw4qy6 Please email [email protected] to RSVP (as there is a limit to the number of people we can have in attendance per meeting on Zoom), for the invite link or for more details.

Dennis Allan Lei, 73, passed away in his Port Orchard home on December 25, 2020. He was born to the late Benjamin and Elsie Lei, September 9, 1947, in Sonora, California. Dennis graduated high school in Benicia, California, class of 1965. Truly... View Obituary & Service Information

The family of Dennis Allan Lei created this Life Tributes page to make it easy to share your memories.

Dennis Allan Lei, 73, passed away in his Port Orchard home on...

Customized sympathy cards. Mailed for you.